Episode 13
Three Forms of Egg Dishes is a dish made by Alice Nakiri for the Breakfast Buffet during the Tōtsuki Friendship and Rapport Training Camp.

A combination of 3 egg dishes in one meal, they are so unique that the staff has considered the set as an art about mother nature. These three dishes are:

Milkshake in an Egg Edit 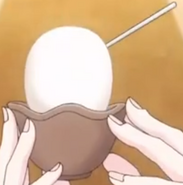 Milkshake in an Egg

Retrieved from "https://shokugekinosoma.fandom.com/wiki/Three_Forms_of_Egg_Dishes?oldid=74796"
Community content is available under CC-BY-SA unless otherwise noted.