Hisako Arato sought to create a hamburger that "vehemently rocks human instinct" by creating a dish that was both richly infused with the flavors of the soft-shelled turtle and that strongly emphasized the gelatinous nature of the meat to stimulate the soft palate.

The patty was made with the boiled meat and innards of a freshly slaughtered soft-shelled turtle mixed with the turtle's blood, ground pork, and turtle shell powder and was wrapped in pork crepiné and pan fried. The patty was also smothered with a sauce made from the thickened turtle dashi, schisandra fruit, kinshinsai, ginger and shaoxing wine.

The patty and sauce were served on a buttered steamed bun topped with korean lettuce and shredded ginger.

How to Make Edit 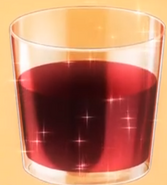 Dried Shell Powder
Add a photo to this gallery

Retrieved from "https://shokugekinosoma.fandom.com/wiki/Soft-Shelled_Turtle_Hamburger?oldid=71791"
Community content is available under CC-BY-SA unless otherwise noted.