Megumi created this dish to counter Ryō Kurokiba's ramen dish as she figured that he would make a strong tasting ramen. Though it appears to lack the same impact of Ryō's ramen, under its beauty lies an incredibly strong flavor created from the usage of Kozuyu. Using dried vegetables, the soup is further enhanced creating an elegant but strong dish. Finally, a paitan soup was made to create a whole new flavor that allows her to fight toe-to-toe with the Mad Dog. 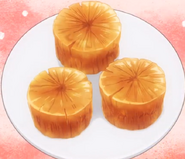 Ramen (/ˈrɑːmən/) (ラーメン/拉麺 rāmen?, IPA: [ɽäꜜːmeɴ]) is a Japanese noodle soup dish, with the term being the Japanese-reading for the Chinese term " lāmiàn" (lit. pulled noodles). It consists of Chinese-style wheat noodles served in a meat-based or fish-based broth, often flavored with soy sauce or miso, and uses toppings such as sliced pork (チャーシュー chāshū?), dried seaweed (海苔 nori?), kamaboko, and green onions. Nearly every region in Japan has its own variation of ramen, from the tonkotsu (pork bone broth) ramen of Kyushu to the miso ramen of Hokkaido.[1]

Paitan is a relatively new 2010s born ramen broth inspired by the likes of tonkotsu ramen, being milky and rich bone broth soup of other varieties of meat. One such new meat used is that of chicken. Its name originating from Cantonese Chinese, it simply translates to "White Broth".

Kozuyu is a Fukushima Prefecture specialty soup dish, and is more specifically known within Japan to come from Aizuwakamatsu of the westernmost Aizu region. Historically renowned for its refined samurai culture and historic importance as Japan's Treasure House of Food, Kozuyu is one such dish that originates from the region, classically made with dried ingredients, specifically preserved seafood such as scallops and katsuo, vegetables such as taro, carrots, and shittake mushrooms, and wheat dumplings known as mamefu. A most beloved soup for celebrations and the depths of winter by samurai and nobility, its battlefield ration origins help give a hearty and robust yet light and yet deep taste from its northernmost Tohoku birthplace. The use of Aizu Chicken helps highlight this, which is a chicken breed prided not unlike the famous Nagoya Kochin.

Notably, Aizu is also the region which one of the Three Famous National Towns of Ramen of Japan is held, Kitakata, being only a few miles north of Aizuwakamatsu. With a large feature of over 200 ramen restaurants in its city, ramen culture and cuisine is paramount to where the term soba refers instead to ramen de facto than its traditional buckwheat noodle variety. Combining both the richness of newborn paitan ramen with the traditional beloved taste of kozuyu, the dish comes to fuse both dishes significant of the Aizu region into a revolutionary ramen soup.

Retrieved from "https://shokugekinosoma.fandom.com/wiki/Kozuyu_Chicken_Soy_Sauce_Ramen?oldid=74828"
Community content is available under CC-BY-SA unless otherwise noted.