Episode 55
Fried Bear is a dish made by Akira Hayama during his cooking duel against Sōma Yukihira.

This is a dish based off of the popular Southern United States dish fried chicken[1], substituting chicken meat with bear instead. Just looking at it's sparkling surface will make you salivate. With the gravy sauce, just a drop will make the diner it's pet. Combined with the bear it becomes stimulating and spicy, yet mellow and sweet. And by using his mastery of spices, he transforms the bear's natural bone stench into an highly intricate constructed tower of flavor! Overall it is a delicate balance between fragrance and taste.

How to Cook Edit 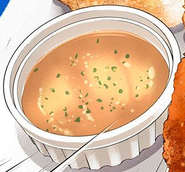 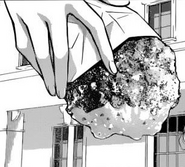 Retrieved from "https://shokugekinosoma.fandom.com/wiki/Fried_Bear?oldid=74900"
Community content is available under CC-BY-SA unless otherwise noted.