Episode 23
French Curry Lobster Rice with Cognac is a dish made by Ryō Kurokiba during the 43rd Annual Tōtsuki Autumn Election's Preliminary Round.

Ryō's curry dish involved with lobster and cognac, a French alcohol. The cognac in particular was of the highest quality, giving the dish the impression of a forest and has the aroma of sandalwood. However, the dish was not done just from the initial appearance. Ryō encouraged the judges to eat the tomalley inside the spiny lobster's head with droplets of cognac then eat the roux and saffron rice. This final part of the dish sent the head judge, Natsume Sendawara's mind into space! 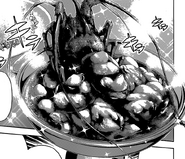