Excellent is a restaurant with Kasayama as the Head Chef. It is also the first Stagiaire location for Erina Nakiri and Megumi Tadokoro.

Megumi Tadokoro describes Excellent as a high class French restaurant led by Head Chef Kasayama, which serves genuine French cuisine. Also, a restaurant that is expected to get their first Michelin star soon. Erina Nakiri and Megumi spent their first Stagiaire week here. Initially, Kasayama orders them to wash dishes since they were newcomers in his kitchen. However, his decision did not sit well with Erina, given her ability, which led her to do as she pleased. When Erina prepared a dish for a food critique who stated that the dish she made was a clear improvement than any dish cooked in the restaurant. Kasayama soon finds out that Erina has instantly taken over his kitchen in a matter of hours. Despite washing dishes, Megumi manages to voice her opinion to them about letting the customers choose the amount of sauce on their dish. Thanks to the combined efforts of Megumi and Erina, they had greatly improved the efficiency of the restaurant and the quality of their dishes, thus the two passed the first stage of the Stagiaire event. 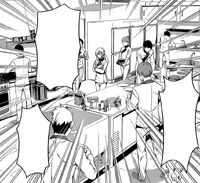 The Kitchen of Excellent

Retrieved from "https://shokugekinosoma.fandom.com/wiki/Excellent?oldid=54850"
Community content is available under CC-BY-SA unless otherwise noted.