Chou Farci is a dish made by Kojirō Shinomiya against Sōma Yukihira and Megumi Tadokoro in a Shokugeki during the 92nd Tōtsuki Generation's Tōtsuki Friendship and Rapport Training Camp at the Tōtsuki Resort.

It used vegetables to enhance the Chicken Breast. Made exclusively by the Vegetable Magician, this is one of the signature dishes of Shino's that made him famous in France. Feast on it and you will never regret!

One of the European dishes, the filling is traditionally based around meat, often beef, lamb, or pork and is seasoned with garlic, onion, and spices. Grains such as rice and barley, eggs, mushrooms, and vegetables are often included. Pickled cabbage leaves are often used for wrapping, particularly in Southeastern Europe. In Asia, seafood, tofu and shiitake mushroom may also be used and Chinese cabbage is often used as a wrapping.

Cabbage leaves are stuffed with the filling which are then baked, simmered or steamed in a covered pot and generally eaten warm, often accompanied with a sauce. The sauce varies widely by cuisine. Always in Sweden and sometimes in Finland, stuffed cabbage is served with lingonberry jam, which is both sweet and tart. In Eastern Europe, tomato-based sauces or plain sour cream are typical. In Lebanon it is a popular plate, where the cabbage is stuffed with rice and minced meat and only rolled to the size of cigar. It is usually served with a side of yogurt and a type of lemon and olive oil vinaigrette seasoned with garlic and dried mint.[1] 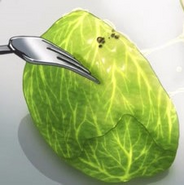 Retrieved from "https://shokugekinosoma.fandom.com/wiki/Chou_Farci?oldid=74784"
Community content is available under CC-BY-SA unless otherwise noted.