The Terrible Combo of Jidori, Pork and Parmesan 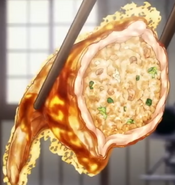 The Japanese word gyōza (ギョーザ, ギョウザ) was derived from the reading of 餃子 in the Jilu Mandarin (giǎoze) and is written using the same Chinese characters. The selection of characters indicates that the word is of non-Japanese origin. Following the Second World War, Japanese soldiers who returned from Manchuria brought home gyōza recipes.[1]

Retrieved from "https://shokugekinosoma.fandom.com/wiki/Cheese-Feathered_Hanetsuki_Gy%C5%8Dza?oldid=78621"
Community content is available under CC-BY-SA unless otherwise noted.