Episode 7
Chaliapin Steak Don is a dish made by Sōma Yukihira for his first Shokugeki against Ikumi Mito.

The dish is exclusively made by Sōma combined with the Japanese original dish, the Chaliapin Steak and the donburi concept for his first Shokugeki. Although the dish was made with cheap ingredients that can be found in a supermarket, the dish focused on both innovation and balance of the ingredients to fulfill the donburi mantra, "Dons are completed in one bowl."

Put rice mixed with Umeboshi paste (pickled plum) in the donburi bowl. Place the beef on top and add plenty of sauce. Top with the finely chopped, cooked onions. 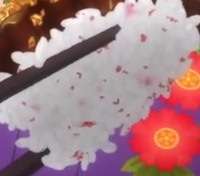 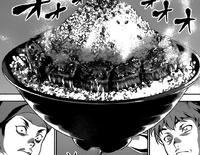 The recipe and process explained in the manga. (Volume 2's extra)