Episode 30
Beef Stew with Bacon Garnish is a dish made by Subaru Mimasaka for his Shokugeki against Sōma Yukihira during the 43rd Annual Tōtsuki Autumn Election's Main Tournament: Semifinals.

Subaru's exclusive dish that looked similar to Sōma's beef stew. With the pork marinated in brine for five days and smoked using Mesquite Wood[1], it is the best garnish material for the oxtail stew. The flavor of the dish is so strong, that you can feel the cross impact of both meat! 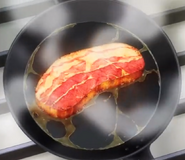 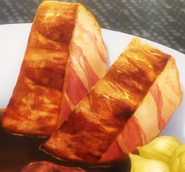 Bacon Garnish
Add a photo to this gallery

Retrieved from "https://shokugekinosoma.fandom.com/wiki/Beef_Stew_with_Bacon_Garnish?oldid=82032"
Community content is available under CC-BY-SA unless otherwise noted.